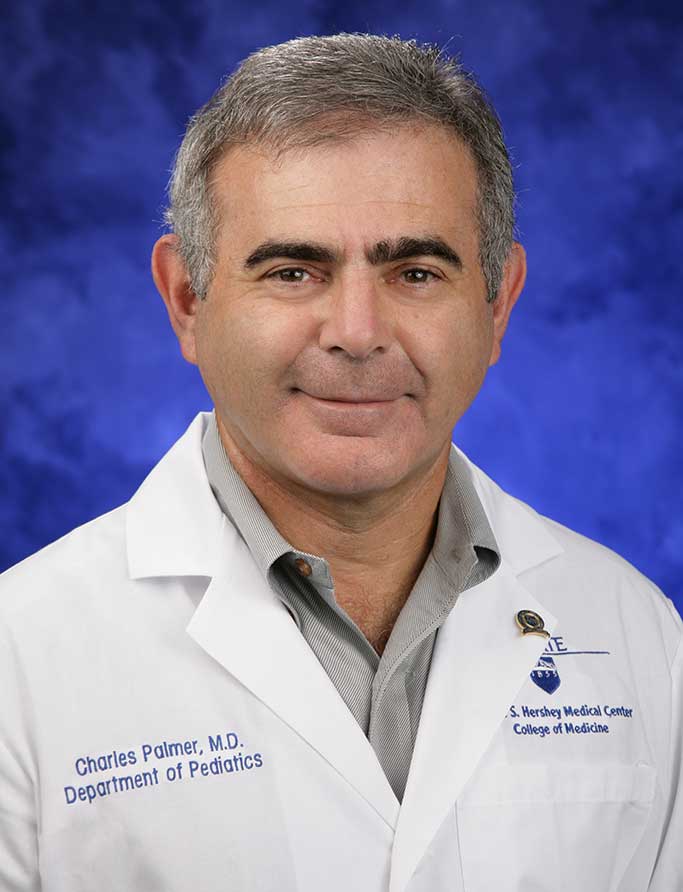 Charles Palmer, MD, obtained his medical training in Cape Town, South Africa, and received postgraduate training in pediatrics, pediatric neurology, and neonatology. He was a member of the neonatal faculty at the University of Cape Town, then came to Penn State Health Children's Hospital as a research fellow in Dr. Robert Vannucci's perinatal brain injury laboratory, while also attending in the neonatal intensive care unit (NICU) . He served the Department of Pediatrics in numerous leadership roles, including 13 years as chief of the Division of Neonatal-Perinatal Medicine and nine years as director of the neonatal-perinatal medicine fellowship program. Dr. Palmer served the American Board of Pediatrics as a member of the sub-board of Neonatal-Perinatal Medicine for seven years and continues to write questions for Neonatal Maintenance of Certification.

Dr. Palmer's early research focused on the prevention of hypoxic-ischemic brain injury in the rodent model. He was one of the first to show that perinatal-ischemic brain injury evolved during recovery and could be reduced by interventions initiated after reperfusion. Dr. Palmer's National Institutes of Health (NIH)-funded research focused on the contribution of free radicals, iron, neutrophils, and nitric oxide to evolving brain injury, as well as neuroprotective mechanisms of hypothermia.

Concurrently with his interest in perinatal brain injury, Dr. Palmer has maintained an avid interest in developing technologies that can improve the care of newborns. He holds 11 patents in various fields of invention. Dr. Palmer has participated in studies that explore the role of skin conductance and autonomic regulation. He and his colleagues observed that heart rate variability can predict the risk of developing necrotizing enterocolitis. This research led to a patent on a predictive algorithm, which measures vagal tone that is low in patients at greatest risk of developing necrotizing enterocolitis. Recently, Dr. Palmer's team showed that vagal tone can be improved by paying attention to the electrical environment, and, more specifically, by connecting the infant to electrical ground.

For more than two decades, Dr. Palmer has worked on ways to support neonatal ventilation noninvasively by developing technologies that can act directly on the very compliant chest wall of premature infants. He and his engineering colleagues have used this technology and developed a method for adhering a soft silicone device to the chest wall. This device can be pneumatically activated to move the chest wall and thereby maintain lung volume, provide negative distending pressure, and potentially provide external high frequency oscillatory ventilation by direct engagement of the chest and abdominal walls. Clinical testing is underway. The University City Science Center and the Fund for Innovation from Penn State provided funding for this noninvasive approach to neonatal ventilation. In 2018, Dr. Palmer's group won a $50,000 second-place award in the Invent Penn State Technology competition. He and Professor of Bioengineering, Dr. William J. Weiss, have formed a company to commercialize their technology and applied for NIH funding.